In this project, we wrote our own computer code using python, a computer programming language, that would compare a random person's DNA to 1,000 other peoples DNA with known ancestry and disease. We downloaded random files of someone's DNA, the A's, T's, G's, and C's. This was all able to happen because of companies like 23andMe. 23andMe is a company where people can send a sample of their saliva and 23andMe will extract their DNA. With their extracted DNA, 23andMe will then sequence their genotypes. Some individuals who get their DNA sequenced then decide if they would like to upload their raw genetic file to a website called OpenSNP.org where it can be used for public scientific study. 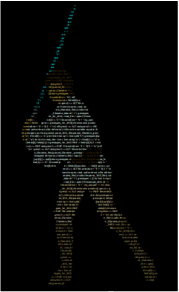 My group's code art.
My group was called Luke Skywalker. Now you may be asking why a Star wars character? Well, many biotech companies and labs have sci-fi characters as the name of their products and the machinery they use. One example is Human Longevity, Inc., a genomics and cell therapy-based diagnostic and therapeutic company, which has sequencing machines named after Star Wars characters. We decided to emulate this custom in our project in order to connect with the biotech community.


I was in charge of making sure that everything gets done and documenting my group's process for the project video. It was a little hard to make sure that everyone had a role in the project at all times because we had to get the code done before you can start working on researching the disease, starting the infographics or code art. So when we had downtime we did the python course on Codecademy. This was very helpful because we all had the opportunity to learn code. Computer coding is an important skill that we could use when we get older. Along with being able to code, we learned how to be patient and to preserve. It was really frustrating getting stuck on a lesson and not being able to move on. Just missing the colon or having it indented could throw off the whole code. Several times I would misspell simple words like "student" or capitalize "Return" and I couldn't figure out what I did wrong. I would consider learning how to code as a team effort. When someone got stuck we were always there to help. We knew how it felt to be stuck on a lesson and we didn't want them to feel that way as well. Learning how to code takes time. We just need to be patient and continue to preserve when things get hard. 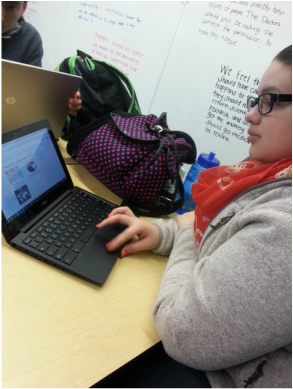 Group mate, Melissa Monarrez, working on a our infographic.
Along with the project itself, project managers were also in charge of planning Festival Del Sol. We had to make pamphlets that could be handed out at the door, plan the layout of the room and assign shifts that didn't conflict with our humanities exhibition, The Book of Us. Throughout this process, I learned how to manage my time and how to communicate with other project managers. We did have our moments when no one knew what they were doing. But after several project manager meetings and a dozen emails, we were able to work through it. I am so glad I had this experience because it showed me just how important communication is. You don't truly no one's importance until it is not there.